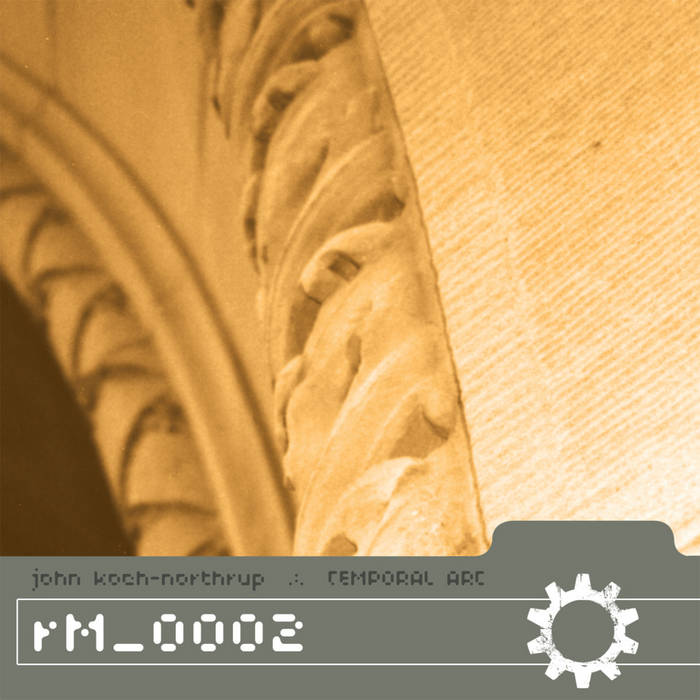 Brian Bourassa Although a bit of a "stray" from my beat-less roots, I am not disregarding the dark-ish, drony parts.

Temporal Arc begins and ends with a sense of heavy beats. But within the core of its presentation, these beats subside into nicely thought out dark-ish drones and textural components. It is as if we are experiencing a history from a tribal era (Frozen - track 1), through some dark experimental time, and coming out (Temporal Arc - track 7) in the techno age.

A fascinating journey. Favorite track: Bones Of The Dead.

I have been a fan of Relaxed Machinery’s output for a wee while now and have featured a couple of their releases on my personal blog recently. For those who don’t know, Relaxed Machinery is the netlabel owned and run by ambient/electronic/techno musician John Koch-Northrup… whose album “Temporal Arc” was given to me to review.

To be honest, I was a little worried about reviewing it… anxious that Koch-Northrup was a better label-head than musician. I was glad when, from the outset of this album, I was proven wrong. Koch-Northrup is a talented musician who deftly moves with the overlapping genres of ambient, electronic and techno.

The opening track “Frozen” is a fascinating expression of electronic music with tremendous variety & the most sublime percussion. These beats are immersive… they come alive and melt into your consciousness… allowing you to lose yourself in the variations in melody and structure. Which, considering the track is 15mins+ in length, is some feat.

Koch-Northrup manages a similar feat with the last track “Temporal Arc” where he presents a wonderfully emotive and cloudy ambient atmosphere and combines it with a stripped back techno rhythm to create a fascinating expression of electronic music.

In fact, this exploration into the minimal reality of dub-techno is a real highlight for me… one I will come back to later.

In between, the first and last track are sizeable excursions into more ambient spaces… the soundscapes presented are deeply immersive and feed the mind with their intimate ideas.

“Movement in glass” and “Bones of the Dead” both have an emotive ebb and flow to them that makes me think of HPLovecraft stories and other similar weird tales. They possess a deliciously dark & overbearing countenance that makes for a great listening experience.

Whereas “Marco Polo” presents an overwhelming wall-of-sound that could have the listener deep in the jungle or a zoo. There is a pulsing repetitive motif that gives movement to the track.

The fifth track “refraction” brings beats back into the picture… with a warm rhythm moving through this delightful track… a track that has a distinct sci-fi edge to it… a track where the listener could have been transported to Gibson’s “sprawl”.

“Gnosio” is more of an ambient whisper compared to the electronic bombast of “refraction”. It has a delicate thrum that is juxtaposed nicely between “refraction” and “temporal arc”.

My only observation, and please note this isn’t a criticism, is how the last track stood out for me. It was both a highlight and a quandary… I loved the minimal techno backing but wasn’t sure if it sat consistently with the rest of the album. The ambient atmosphere definitely did but I’m not sure of the beats. Techno is not for everyone… it can be too repetitive or minimal… and its inclusion on this album may not work for some.

That said, I have a deep love for dub-techno’s minimalism, when in the mood, and I thoroughly enjoyed the last track… it was a highlight to me and would love to hear a whole album from Koch-Northrup in the style of the last track.

All in, this album is a great example of what can be done in the intersection between electronic, ambient & even techno. I would recommend it accordingly.

John Koch-Northrup has re-released his album Temporal Arc on his own Relaxed Machinery label (rM_0002). Originally released in 2001 under his Interstitial alter ego on the Red Antenna label, the album finally comes home under John’s own name, heralding the end of a recording hiatus which began in 2004.

The 15-minute opening track, Frozen, contains the album’s ethos in a nutshell, with its strongly chugging and thumping groove. With coldly shimmering tones, John quickly builds a pulsing atmosphere on this rock-solid foundation. This is organic, ambient techno – this is the sound of relaxed machinery, nearly ten years before its namesake label came into existence. Belying the piece’s title, the groove never stays the same for long, the synths swinging right along with it. True, the synth sounds are cold enough to warrant the title, but shake this ice enough and it must eventually break down.

The album is chock-full of industrial, metallic atmospheres, particularly on Marco Polo, which featured one of my favorite moments: a clutch of shimmering, luminous tones near the end which left us far too soon – I really loved that sound. This piece sang of a journey of adventure about to begin, the lure of new, strange lands. The rolling, racing piano interlude was a surprise treat.

Other highlights for these ears: Bones of the Dead begins with a splendid, swelling, glassy, ring-modulated thrum. This piece’s tones continually rise and fall, like memories of lost ones flashing through the mind. Gnosio is another series of rising and falling textured drones, portending something hitherto unknown. Refraction features a growling bass and shimmering, backlit synth chords under a slowish electronic groove.

The title track, the album’s longest, closes with another industrial environment, with glitches firing off every few seconds, then basses sliding by just as often. A marching rhythm ensues, very minimal with just a drone and a chugging sequence. A snappy drumbeat spices up the groove, but the piece’s tectonic drones still aptly suggest the inexorable, slow march of geological time.

Bandcamp Daily  your guide to the world of Bandcamp